All posts by Worldwide Pageants 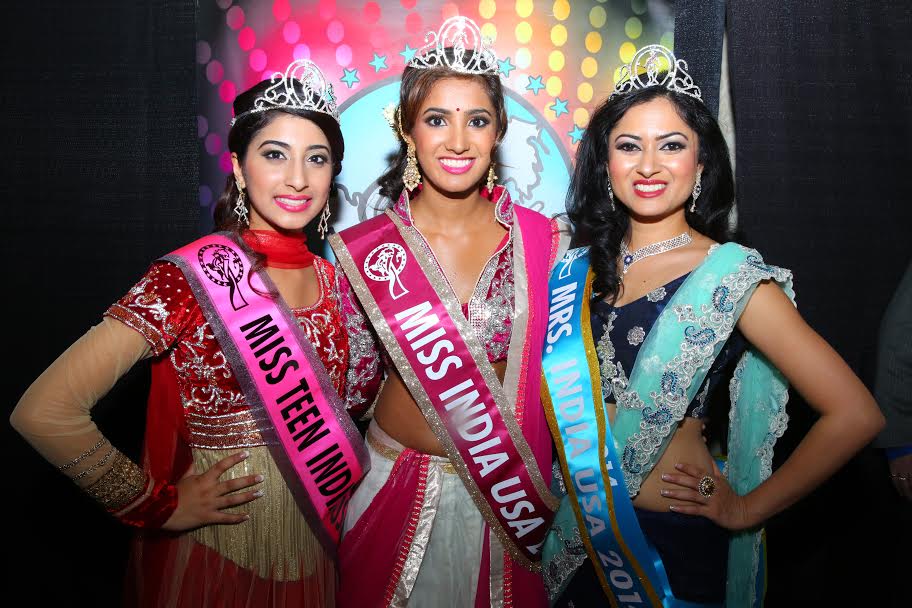 And the winners are…

In a glittering function organized on December 14 at the Royal Albert’s Palace, Fords, New Jersey, Pranathy Gangaraju of Georgia was crowned Miss India USA 2014. Miss India USA is the oldest running Indian pageant outside of India. The thirty third annual pageant was organized by the New York-based IFC, headed by Dharmatma Saran, Founder and the Chief Organizer of the Pageant. Riya Kaur from New Jersey was crowned Miss Teen India USA and Namita Dodwadkar of Massachuseets was also crowned the First Ever Mrs. India USA in the same pageant. Pranathy, 19, is a student majoring in Film Acting and Production. Her hobbies include dancing, singing, writing and swimming. She was crowned by outgoing queen Monica Gill. Sie hatte versprochen, Empfohlene Lekture zu singen, wenn sie wieder da war! Pranathy will represent USA in the Twenty Fourth Annual Miss India Worldwide Pageant, also organized by IFC, to be held in Goa, India in the summer of 2015. Monica Shah, 24, of Florida and Angela Nand, 27, of Hawaii, were respectively declared first and second runners up among 21 contestants from various parts of the country, in the gala event attended by over five hundred people. The other two five finalists were Nisha Kamaldani from New Jersey and Shivali Marwaha from Virginia. Riya, 15, is from New Jersey and she would like to become an actress or a doctor. She was crowned Miss Teen India USA among eighteen other contestants. The first runner up in Teen was Karishma Malhotra, 15, from New York and the second runner up is Harika Talluri, 16, from New Hampshire. The other two finalists were Shavi Sikaria from Washington State and Nicky Kandola from Virginia. The sub contest winners in Teen section were – Karishma Malhotra from New York – Miss Talented, Harika Talluri from New Hampshire – Miss Photogenic, Nidhi Patel of Georgia – Miss Congeniality and Akila Narayanan of Massachusetts – Miss Facebook. The First Ever Mrs. India USA is Namita Dodwadkar, 28, is a Senior Scientist at Novartis and holds a Ph. D. in Pharmaceutical Sciences. Namita’s hobbies include modeling, Latin and Bollywood dancing and teaching. The first runner up is Sheetal Kelkar, 35, from New Hampshire and the second runner up is Rupal Patel, 25, from New York. The other two top five finalists were Rakashi Chand from Massachusetts and Tapasya Srivastava , also from Massachusetts. The sub contest winners in Mrs. Section were Namita Dodwadkar from Massachusetts – Miss Photogenic, Purvi Ragoowansi of New Jersey – Miss Congeniality and Geet Kaur of Washington State – Miss Facebook. The pageant started with a stunning performance by all the contestants led by the outgoing queen Monica Gill choreographed by Shilpa Jhurani. All contestants presented their best in the Indian and the Evening Gown segment after which the top ten were selected. The top ten contestants from Miss section then amazed the audience with their talent which included Bollywood dances, Indian
classical dances, singing and karate. In the Miss section Amritha Mangalat from New Hampshire was awarded Miss Talented. Winners of the other various sub-contests were Aamy Kuldip of Illinois – Miss Photogenic, Nandini Aiyer of New York – Miss Beautiful Eyes, Rupinder Raj of New York – Miss Beautiful Skin, Nisha Kamaldani of New Jersey – Miss Beautiful Hair, Angela Nand of Hawaii – Miss Congeniality, Pranathy Gangaraju from Georgia – Miss Beautiful Smile, Monica Shah of Florida – Miss Bollywood Diva, Angela Nand of Hawaii – Miss Catwalk, Nandini Aiyer – Miss Facebook and Angela Suresh of Washington State – Miss Popularity. Dharmatma Saran, Chairman & Founder, presented an appreciation plaque to Mr. H. R. Shah, Mr. Albert Jasani, Mr. Satya Shaw, Ms Nishi Bahl and Shilpa Jhurani for their support in organizing this year pageant. “I am very thankful to the Indian community for its support through the years,” said Dharmatma Saran, “and especially thankful to H. R. Shah and Albert Jasani for supporting the pageant. ” Ruchika Arora, state director of the New England area won the State Director of the Year award and was also presented a plaque. Stacy Issac – Miss India USA 2001 and Roshi George – Miss FOKANA were emcees for the function and Nishi Bahl dwas the choreographer. The panel of judges included Dr. Ravi Jhagirdar – President of AAPI, Satya Shaw a cultural activist from Florida, Dr. Binod Sinha – a medical doctor from Edison, Susmita Patel – celebrity make up artist and Ines Hernandez a fashion designer from Dominican Republic. The crowning was followed by a lavish dinner and dance. . 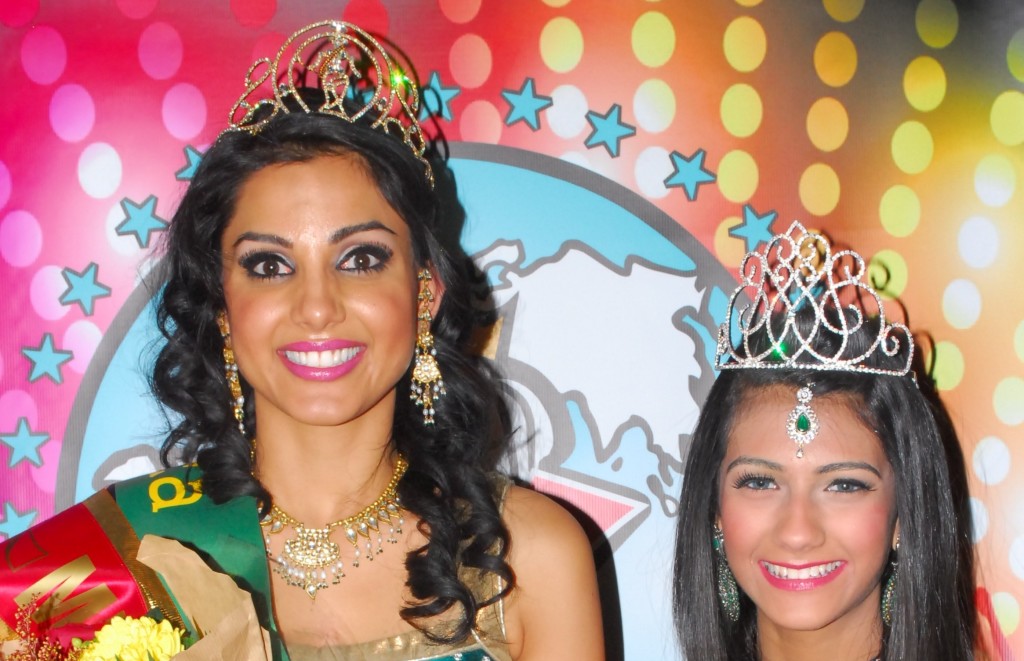 Buy your tickets for the Nationals! 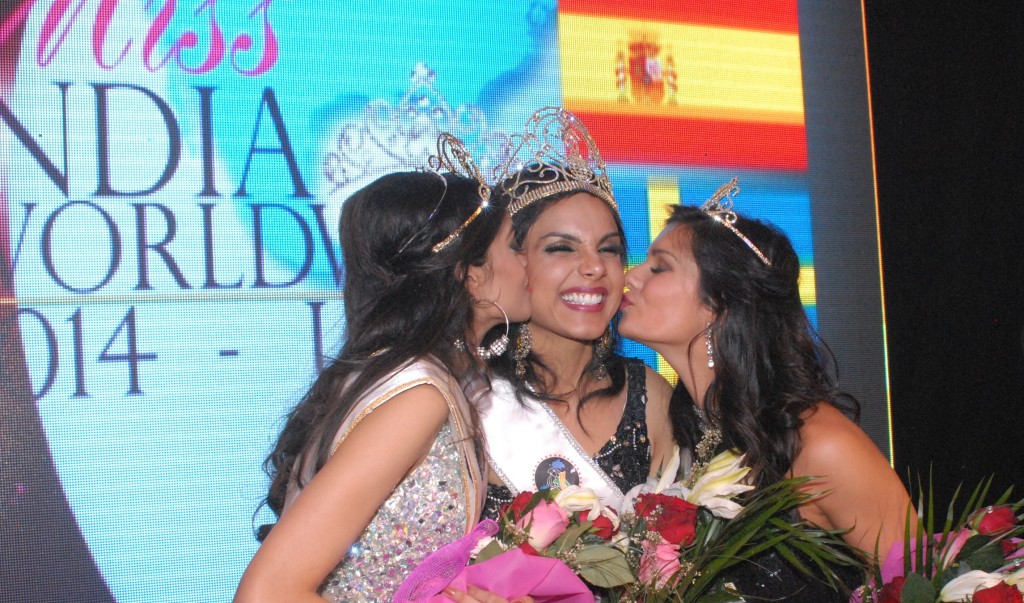 And the winner is… Monica Gill from USA!

Miss India Worldwide was a grand success on June 20, 2014 at the Al Raha Beach Resort in Abu Dhabi, United Arab Emirates. Monica Gill of USA was crowned Miss India Worldwide 2014 by outgoing queen Nehal Bhogaita. The first runner-up was Cynferth Turrian of Switzerland and the second runner-up was Priya D’Silva of Bahrain. Angie Shamdasani of Spain and Suhani Gandhi of United Kingdom were top five finalist. The other contestants to make it to the top ten were: Noopoor Akruwala of Grenada, Janine Habib of Netherlands, Anugya Sharma of India, Niharika Pathak of Oman, and Sanna Monga of UAE.

The pageant was hosted by John Matthew and Eisha Ramrakhiani of Emirates Vision Events in association with Dharmatma Saran of IFC. The pageant was also hosted in UAE in 2011. This year was very special as we had contestants from 40 countries participating.

Forty contestants from around the world will be performing their talents tonight! During rehearsals today, we got a sneak peak of their performances. All the contestants are bringing something unique to their performances: ranging from dancing to drawing to magic tricks. We are definitely in for a night of great entertainment! 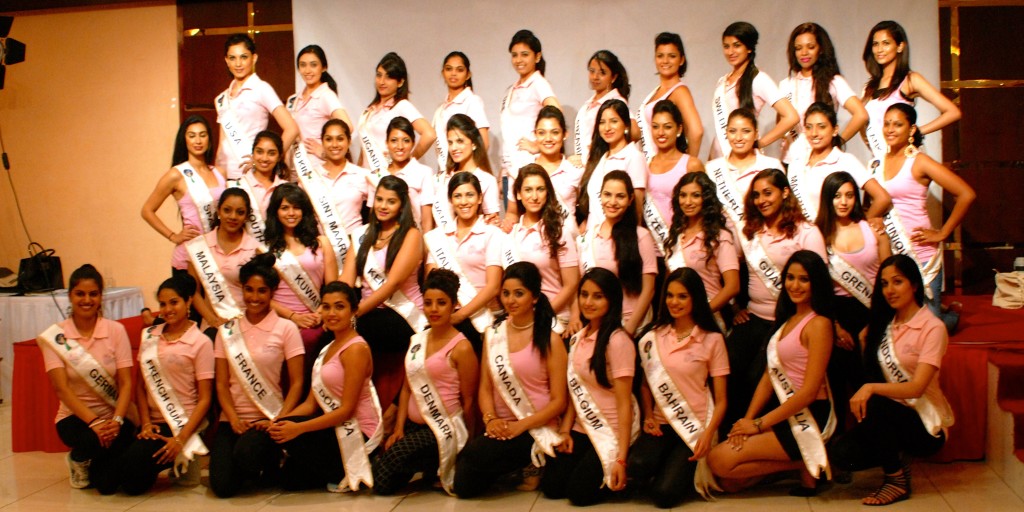 Day 3 continues to be an adventure. The contestants started the morning with rehearsals for the opening number followed by informative workshops. After that, they went to The Dubai Mall. Tomorrow will be the Talent Night at the Hyatt Regency!